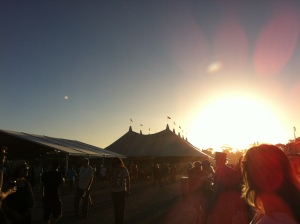 Lying on the grass in the sun is the perfect way to experience Steve Earle. His deep, honeyed vocals roll out like waves above quiet, acoustic country strumming and bucketfuls of old America nostalgia.

Earle is alone on stage, dressed plainly, a harmonica hanging from his neck. He winds his way through songs about the devil, to songs about God and miracles and redemption- “Everyday I’m offered another chance to get it right”. It’s an open, reflective performance. Perfect for a Good Friday. Earle closes with Copperhead Road, to howls of appreciation from the crowd.

Harry Manx, as well, drifts his way through the set at the Jambalaya stage. Slide guitar and organ dominate proceedings, cloaking the vocals of Manx with swampy licks and blues runs. His husky voice manages to churn out a Dixie Chicks cover (“I think they’re an all male band,” he jokes), much to the crowds delight, who pack the tent to hear.

Emerging from the tent, a far off bass and drums thunder, and a sound not unlike 4 jet engines starting up permeates my eardrums. It’s a hydrogen bomb explosion of metal guitar shredding, hellish and heavy. Joe Satriani is mid way through his set, and is tapping, bending, and shaking the notes from the guitar like wringing blood from a stone. His fingers fly over the fretboard, never seeming to touch but creating crazy melodies that scream out over the astonished audience. The drums and bass slam along behind him, and the noise is near deafening. He grabs the whammy bar and twists the sound as far as it will go, before punching back into lightning quick riffing. It’s head banging metal guitar at its finest.

It’s nothing compared to the three of them at once. Steve Vai, looking like a vampire, and Steve Lukather, with an unexpectedly great voice, ready themselves for battle. The next half hour is a marathon of competing guitars, shrieking banshee solos and slamming rhythms. When the three come together to cover Hendrix’s Little Wing, the crowd near explode. It’s true to the original, the three spinning their own melodies but uniting at the end to play Jimi’s original solo. It’s an awesome moment, loud and emotional. Playing the guitar with teeth, playing behind the head, walking fingers up and down the fretboard, they finish on “Rocking in the Free World”, but still manage to spin out the Smoke on the Water riff in the middle of it. It’s an exhaustingly good performance.

Sublime With Rome, meanwhile, were stomping their way through their brand of hip hop trimmed with reggae and rock. Whilst the moon rose outside their tent, they busted into a frenzied double time, powered by cymbals and white noise guitar.

Over at the Jambalaya, the crowd was dancing and leaping to soul classics dished out by Candi Staton. She served up syrupy covers of “Stand By Your Man” and “Young Hearts Run Free” like maple covered pancakes at a food stall. The band was tight and thumping, and tore through the motown and soul rhythms whilst radiating an infectious energy. Staton scatted “Amazing Grace” in the middle of Young Hearts Run Free as she strutted the stage, belting out notes and sass in equal measure. She finished with “You Got the Love”, subtly reminding everyone that it was not, in fact, written by Florence Welch.

Buddy Guy at the Crossroads was an example in showmanship, flipping his way through a blues history lesson. John Lee Hooker, Cream, B.B King, Hendrix and the Stones were all given a touch up. Scratching his fretboard on his legs, he managed to play Sunshine of Your Love without any use of his fingers, instead preferring to slap the board with his towel.

Keb Mo brought the mood down low with his watermelon cool voice above a slow blues, soul backing. His sweltering “Dangerous Mood” was a heartbeat tempo drowned in blue smoke.

The crowd started to crush in, at the front where I found myself I couldn’t raise my arms to scribble notes or even stretch slightly. It was tense as we waited in blue light. A roar started to build, and then exploded when the figures of Crosby, Stills and Nash shuffled on the stage. They remained in darkness until the first acoustic chords are blasted from the stage, a full, ringing sound that punches into your ears. Yellow light illuminates the stage as they launch headlong into “Carry On’. Stephen Stills lets rip on a blinding guitar solo, whilst David Crosby smiling looking like Santa Claus. Graham Nash smashed a tambourine whilst sending his vocals soaring to the back of the tent. The harmonies were slick, powerful, not a note out of place. They rode above the heavy guitars and slamming drums, a wave of noise that flowed from the stage, engulfed the audience and kept on surging. They ran through Marrakech Express and Long Time Gone- culminating in an epic jam of ringing guitars and a crescendo of drums and bass. They smiled as the crowd yelled their way through Our House before Nash roared out the last note.

“Stephen is supposed to write the rock tunes,” Crosby said to a ravenous crowd, “Nash is supposed to write the anthems that the world wants to sing. And I….just write the weird shit. And I do.” Before spacing things out with ringing acoustic notes and haunting vocal melodies. The layered harmonies swirled and built up and crashed down, the timing razor sharp. They soar out, lifting the crowd, and then they vanish leaving us hanging on the precipice.

Wooden Ships sent everyone back to Woodstock with a thundering beginning and spaced, eerie verse. Ferocious, psychedelic harmonies belted the chorus out as the chords near blasted the speakers. Crosby lifted the tent by holding the last, epic note, the crowd utterly silent as his powerful vibrato echoed out. It crashed back into an explosive finish whilst the roof of the tent was nearly torn off by crazed fans.

After two encores, they finished on Teach Your Children, a short, acoustic strum off nearly drowned out by the singing crowd. The three exited the stage, looking hyped but exhausted, not unlike the crowd that bounced around for minutes afterwards, hoping for a 4th encore.

But, alas, no 4th encore to be had. The crowd dissipate, wandering off into the freezing cold night, full moon blaring overhead.