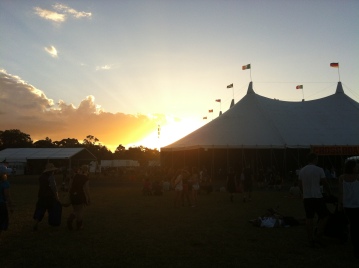 Trying to sneak in an intravenous drip of coffee didn’t make the security guards smile, but by Jove I needed that caffeine. The fifth day of 4 hours of sleep a night had hit, and my eyelids were being held open by sticks until the Bluesfest coffee tent injected me with espresso.

Ray Beadle was showing off his chops with thumping blues/ soul guitar at the Crossroads. Flinging in ACDC licks over walking bass lines, he ripped his way through the set. Problems with the sound marred the set though, Beadle’s vocals at times too quiet to be heard.

The problems continued through Joanne Shaw Taylor’s set, as no lead guitar was

projected through the front of house speakers, meaning that unless you were right in front of the stage, you couldn’t hear anything. The engineers got shreds torn off them by angry audience members storming out of the tent.

Justin Townes Earle appeared in a checked suit and tie next, and delivered the most bizarrely out of time, out of tune, and out of everything else performance. He stumbled his way through 2 minute long, plinky delta blues tunes, rolling out his oaky, deep voice.

Thunderclouds started to roll overhead and lightning flashed in the distance as John Fogerty took to the stage in the Mojo. Images of baseball and American past-times flipped behind him as he churned out a high energy set full of Creedence favourites. His curious habit of changing guitars every song (to prevent them going out of tune) is still going strong, as he switched from Telecaster to Rickenbacker to a cherry red Ibanez to an acoustic to a Les Paul and just about every other guitar in existence.

Kenny Wayne Shepherd fuzzed his way through Hendrix’s Voodoo Child,power stances in plentiful display. It was a controlled mess of white noise and headache inducing distortion.

“How’s my hair?”, Dweezil Zappa asked the crowd before launching into a raucous “City of Tiny Lights”. Zappa Plays Zappa delivered a cacophony of sounds and off the hook dynamics. Tippity-tappity drums and scatting vocals underpinned and overrode the controlled chaos of Frank Zappa’s tunes. They flipped through a Rolodex of musical genres and stitched them into a quilt of psychedelic madness. “Motherly Love” evolved in “Dirty Love” , the band stopped and started and trilled and erupted to keep everyone on their toes. Playing his father’s guitar, Dweezil stood at the centre conducting it all, sprinkling tales of Frank throughout (“He comes in one day and says: ‘I’ve got a platypus in my briefcase!’, and I thought, what the fuck do you say to that??”). Finishing an hour later on Willy the Pimp , the razor sharp band had played just about everything but the kitchen sink, and had led the astounded crowd through a minefield of raw fusion.

And as if that drug trip of sounds wasn’t enough, Yes bounded on to the stage and crashed through a set of 60’s, LSD fuelled prog rock. Starting with “Yours Is No Disgrace” the new vocalist, Jon Davison, soared his counter tenor over thumping drums and twisting guitars. The graphics of album covers flashed behind them in an amazing display of kaleidoscope colours. The band peppered the set with some new tracks (which sound exactly like the old ones, funnily enough) but appeased the crowd with old classics such as the 20 minute finale “Owner of a Lonely Heart”.

The last wafting notes of Maceo Parker’s sax echoed over the emptying grounds. The stragglers clutched steaming cups of miso soup at the late night sushi tent, shovelling the last of the rice cakes into their mouths.

Having never found ear plugs, my ears rang like church bells as I near face planted with exhaustion into my chai tea.