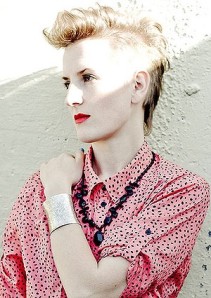 Currently in the middle of a national tour to promote her fourth record, The Moment, Australian blues artist Mia Dyson remembers the long road she took to get here.

When was the first time you remember listening to music?

In my parents mud brick house in the bush outside of Daylesford. They were always playing records on the record player and dad was often playing guitar in the house too.

You said once that you heard Hendrix and abandoned the piano for the guitar. Which artists do you most admire now?

Lucinda Williams is my favourite singer/songwriters, Gillian Welch is one of my top favourite songwriters.  And then there’s Neko Case, The Band, Tom Waits, Bob Dylan…

How did the album develop? Was there a process to it, or did songs just come to mind in the middle of night?

The songs were written over a long period of time. It’s rare for me that songs will just ‘come to me’ but it did happen with ‘Pistol’ on this album. The rest started as ideas – either lyrical or melodic, and were developed and worked on over months or even years. ‘Jesse’ took me years to write as it is a story of forced adoption, imparted to me by a woman at a show.  The weight and gravity of the story made it challenging to write.

How many songs didn’t make it onto the record?

The song ‘Cigarettes’ has a really big Lucinda Williams feel. How big of an influence was she on you, and this record?

Yep, you can hear it for sure. As I wrote above, she’s one my all-time faves. This song is definitely an homage to her.

In ‘Two Roads’, you reference the Robert Frost’s famous poem. How much did ‘the road’ or the romance of the road, shape this album?

I think it definitely has a part to play. Since I began my music career, my life hasn’t been very stationary and so I get to see things from the perspective of someone travelling through. I like to think it helps my song writing to be on the move. And I am definitely still a romantic for the road.

How difficult is it to maintain your signature sound- to keep old fans happy so to speak- whilst moving forward into different musical areas?

I don’t think I really try to do that. I just write what seems to feel good to me and then I don’t have any control over how people will receive it or react to it.  Trying to please everybody would spin me in circles.

How do you think ‘The Moment’ differs from your previous records?

I think it’s more honest and direct lyrically and has a stronger, more confident sound to it.

What’s it like trying to balance your creative control with those that also have a vested interest in your music?

Well, I don’t have a record label or a manager so it’s actually pretty easy! Especially on this record. I found the people I wanted to work with, got crowd funding to help pay for the record, and so I had complete creative control.

What was it like recording the album? Did the songs change much over time?

Recording this album was a really wonderful experience. My previous albums were anxious, pretty painful processes. And this one was still challenging and there was always fear, but the producers  and players (Erin Sidney, Pat Cupples and Lee Pardini) supported and encouraged me throughout, and pushed me to do my best work. We had a fabulous studio up in the mountains north of Los Angeles and we had Erin’s wife Dariel cooking fabulous meals for us each day…pretty sweet.

Mia Dyson is currently touring nationally. The Moment is out now through Black Door Records.

Read our review of The Moment here

Error: Twitter did not respond. Please wait a few minutes and refresh this page.